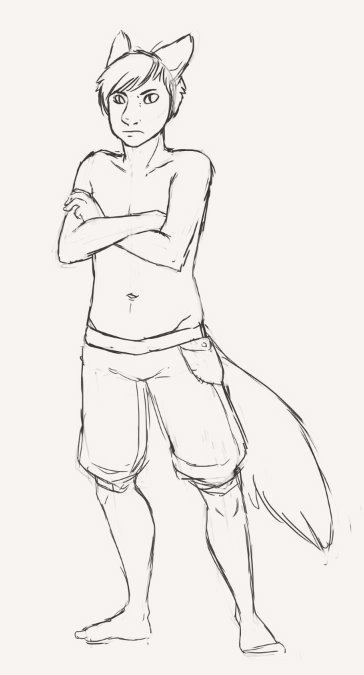 Kell is a male Kitsune from I Think, Therefore We Are. He also features as the embodiment of the weapon called Heartbroken in Calm Silence.

A fearless Kitsune of the tribe, Kell is a powerful force. Skilled in a variety of ways, Kell is at the forefront whenever trouble arrives. Gifted with an unusual physical might and a potent intellect, he is the most capable of dealing with whatever danger may present his people.

While he has plenty of strengths, his capabilities have gone straight to his head. Arrogant and careless, Kell accepts any challenge while womanizing anyone within sight. While his advances are generally always accepted, the only one who has presented to him any difficulty is Shalice, the black sheep. Her defiant nature and stuck up attitude gnashes against his perfectionist nature, as he expects everyone to fall in line with him. While he is far more capable than her, her refusal to give up irritates him greatly. He belittles her and derides her at every opportunity as a way to get her to fall in line.

When faced with the opportunity to find a new home for his people, he expects to pass with flying colors. When his arrogant nature is revealed to the Elders, his refusal to allow Shalice to be better than him encourages him to come up with a plan...

Community content is available under CC-BY-SA unless otherwise noted.
Advertisement